Out on the road, you count on drivers to make the right decision for the right reason. Driver safety training is a proven way to reduce risk, but some fleets choose to roll the dice — even as crash settlements soar into six and seven-digit figures. Why?

But what about when the path to success is not so clear? In my experience, and maybe yours too, disagreements are often caused by a communication breakdown, not philosophical differences. I had a boss in the Army who called this the “The Great American” rule.

During my 15 years with Schneider, we followed an enduring credo: nothing we do is worth harming ourselves or others. These nine simple words had a powerful influence on everything we did. When drivers and leaders felt they had competing demands, this simple principle guided them to common ground.

As a leader, it’s your job to get everyone on the same page. During my military career, I learned the importance of communicating intent. When soldiers know the ultimate goal of their mission, they can make tactical decisions in the field, even without specific orders.

For carriers, this means empowering drivers to recognize problems and to make the right choices out there on the road (intent). In the fast-paced world of trucking, drivers face an ever-changing work environment: new routes, new technologies, new sites, new SOPs. It’s impossible to make a list of every situation a driver may encounter and what they should do - that list would be out of date within a month. Instead, you must communicate the overarching goal (safety) and train drivers to make safe decisions.

For example, imagine a driver arrives at a delivery site and sees there’s construction happening in the lot and at the dock. It’s chaotic, and the driver’s alarm bells go off. 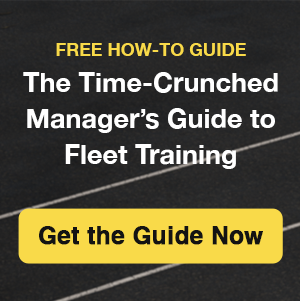 Just as Great Americans are committed to protecting their country; carriers and drivers have a shared commitment to safety. So if you’re getting pushback from drivers about safety training, it’s probably because of a communication failure. Here’s what usually happens:

Carrier leaders use fleet safety data to identify safety issues and find opportunities for improvement. They use analytics to determine causal factors for crashes and choose appropriate training programs to address problems.

Drivers, on the other hand, only know what can be seen from the seat of their truck. But they see it with great regularity and clarity. They too develop a sense for safety issues and crash causation. During the many hours they spend driving in solitude, they’ll fill in whatever hasn’t been explained to them by their leaders using ideas based upon their observations.

Disagreements occur because carrier leaders have information drivers don’t have, and drivers have information leadership doesn’t have. It’s the Great American Rule in action. Most commercial drivers take safety very seriously and want to avoid incidents.

Professional drivers expect and deserve open, honest, transparent communications from their leaders. At Schneider, I found once I listened to the drivers and shared my knowledge with them, our disagreements faded away.

Leadership is leadership whether you’re in the military, coaching a team, or managing a fleet.

How to Launch a New Training Initiative

Start by finding common ground with your drivers and remind them of your shared safety goals. Describe problems your fleet is facing and explain how drivers play an essential role in solving these problems. Here are a few ways to kick things off:

Carriers and drivers have a shared commitment to excellence. As I mentioned at the beginning of this article, everyone is on the same team - but there is one critical difference. In football, when excellence isn’t achieved, a game is lost. If commercial drivers fail to achieve excellence, people are injured or killed. The stakes are simply too high to allow for sub-par performance.

Doing things right also means respecting the driver’s time and making training convenient. Online truck driver safety training is convenient for drivers and cost-effective for carriers, but some are better than others.

Quality fleet driver training ensures drivers know what they need to do and how to do it right. Boring footage of a talking head with a whiteboard causes drivers to lose interest; whereas videos depicting real-world scenarios and interactive quizzes enhance learning and keep drivers engaged.

Building a Culture of Safety: An Interview with Cargo Transporters, Inc.

How Has COVID Changed Safety Training?

One of my favorite memes about COVID-19 is the one that says, “It’s Blursday, the Fortyteenth of Augtember.” In our ne...

How to Gain Executive Support for Truck Driver Safety Training

There's a difference between commercial and passenger GPS systems. And now the FMCSA plans to mandate GPS training for t...